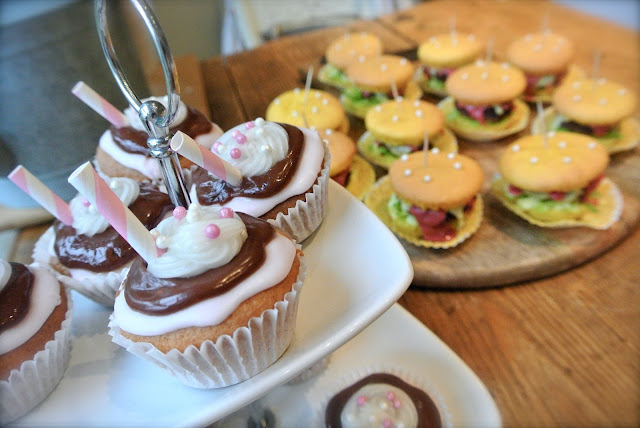 There is something
incredibly exciting about desserts disguised as fast food – my obsession with
burgers, chips and icecreams can be witnessed in some of my early jewellery
designs like my fast food bracelet, and I’ve been waiting for the opportunity
to make edible versions for a while. Tomorrow our lovely neighbours are
celebrating their birthdays (just days apart) and so I thought I would make a
kitschy addition to the desert table! 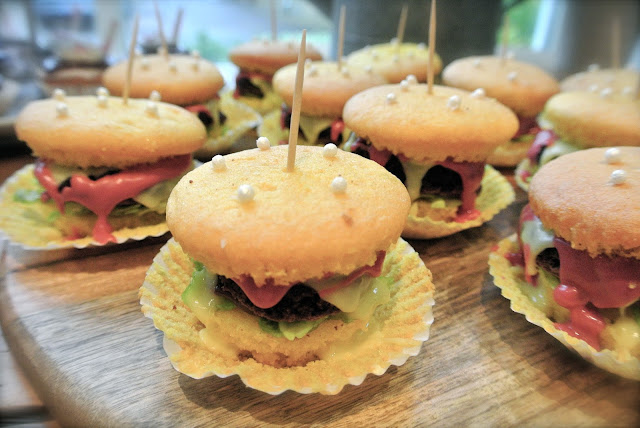 For the burgers, you
will need:
Chocolate Brownie Mix
Lemon Cake Mix (or your favourite cake recipe with lemon/yellow colouring)
3 eggs
Approx 160ml water plus extra for icing
About 300g Icing Sugar
White Icing from a tube
Red and Green (and maybe yellow, depending on your preference) food colouring. 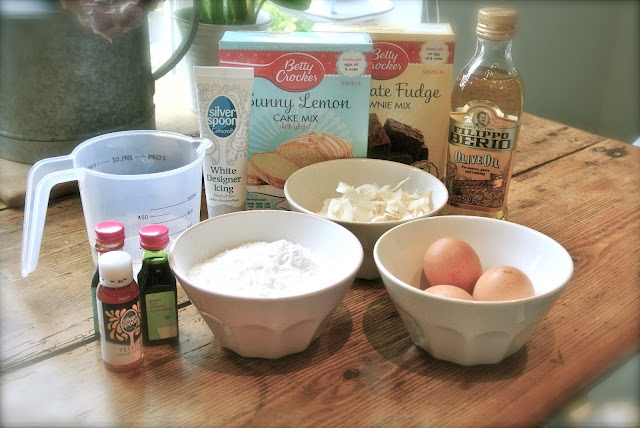 Equipment wise, you
are going to need a large mixing bowl, electric mixer if you have one, a
cupcake tray lined with cupcake cases, a large baking tray, grease proof paper. 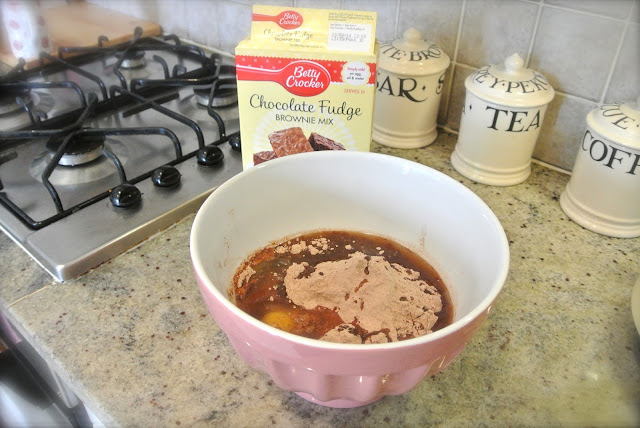 1.) Start by
making up the brownies according to the instructions on the box. I have lined
my baking tray with grease proof paper as it has lost it’s grease-proof-ness
recently, and then I sprayed the paper very lightly with cooking oil. Spread
the brownie mixture thinly (about 2cm max in thickness) and pop it in the oven.
Set aside to cool once cooked. 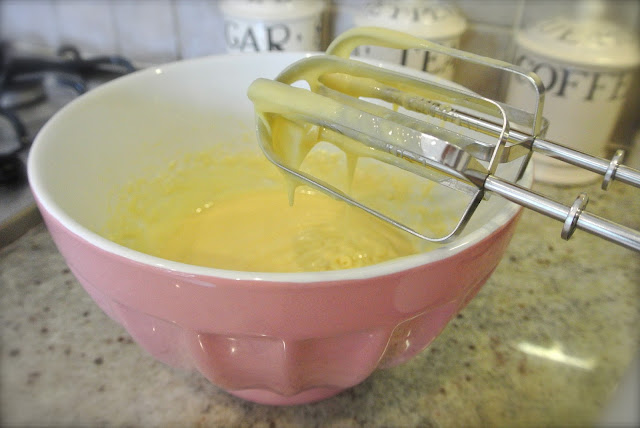 2.) Next, you
need to make the lemon cupcakes. Follow the instructions (add extra yellow
colouring if desired) and then divide the mixtures into your cupcake liners,
filling each one about 2/3rds. 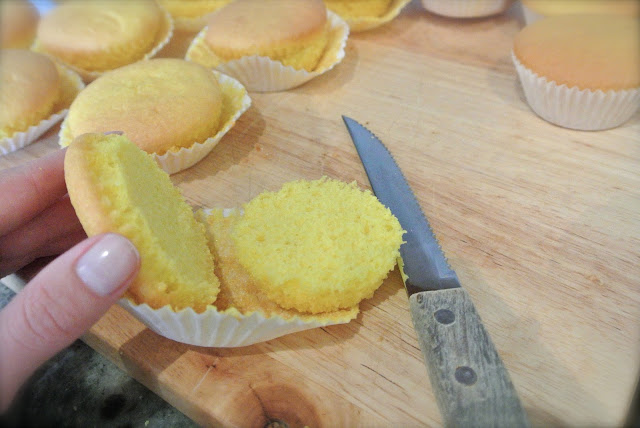 3.) It is really important that after cooking, you leave the cupcakes to
cool for at least an hour, otherwise they will crumble.
Carefully peel open the cases and then cut the cupcakes in half, just under the
‘muffin top’ with a sharp knife. I used a steak knife. 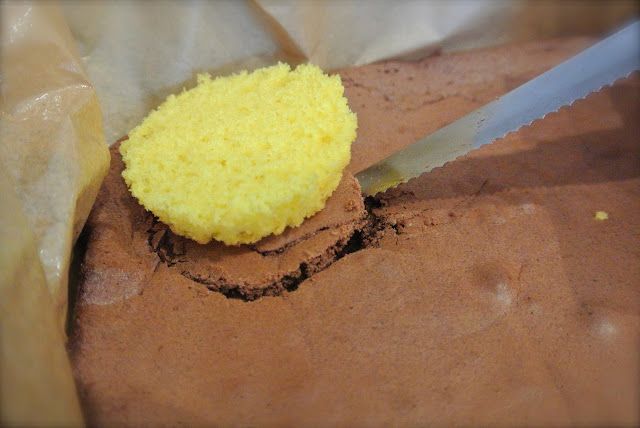 4.) Then,
using the lower half of the cupcake as a guide, cut circles out of the
chocolate brownie. I find it works best if you peel the entire brownie off the
grease proof paper before cutting individual circles. 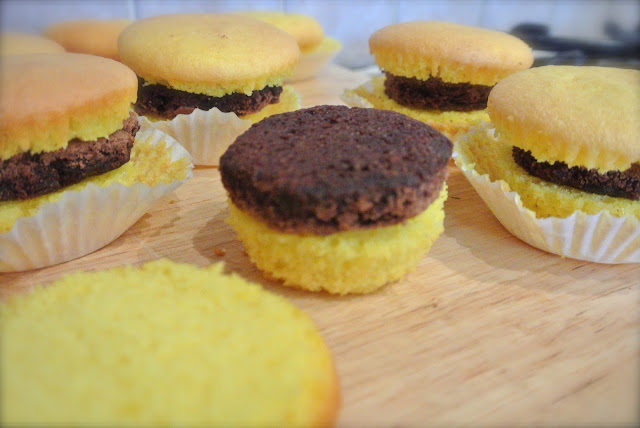 5.) You then
need to make the salad, so add a couple of drops of green food colouring to a
bowl of coconut shavings, and mix it up. Sprinkle some of the coconut on the
base of the cupcakes. You can put the brownie on top at this point, however I
have melted some chocolate and pasted it on the brownie to help everything to
hold together. 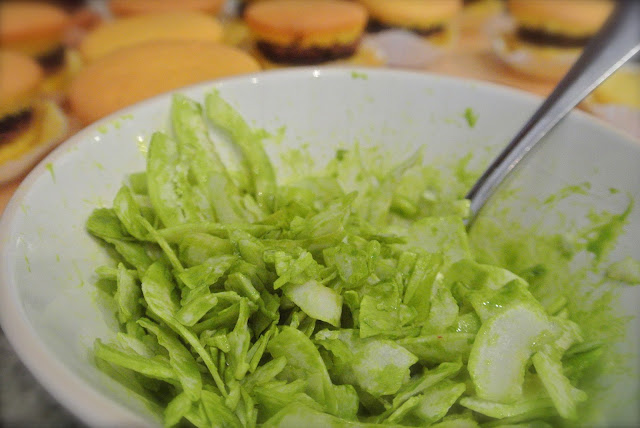 6.) Mix up
some yellow icing sugar, remember only to use the tiniest about of water,
otherwise the icing sugar will be too runny. Add it tiny drop by drop, after
the food colouring. Spoon the yellow icing onto the burger ‘patty’; don’t be
too tidy, it looks more realistic if you have some ‘cheese’ dripping down the
sides! 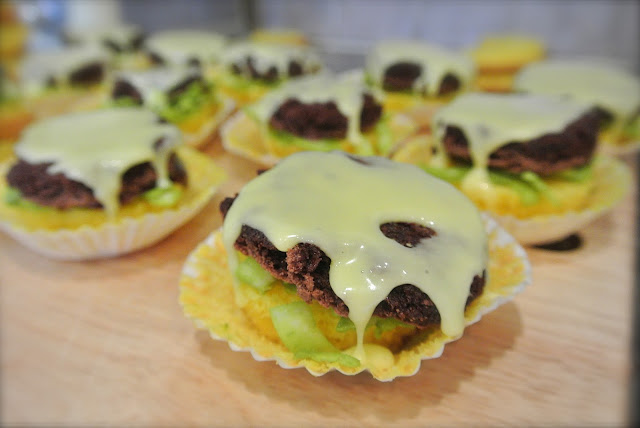 7.)   Leave the
yellow icing to dry for about half an hour (I started creating the icing for
the milkshake cupcakes at this point) and then mix up some red icing. In the
same way as before, spoon it over the yellow icing to give the effect of
tomatoes or ketchup. 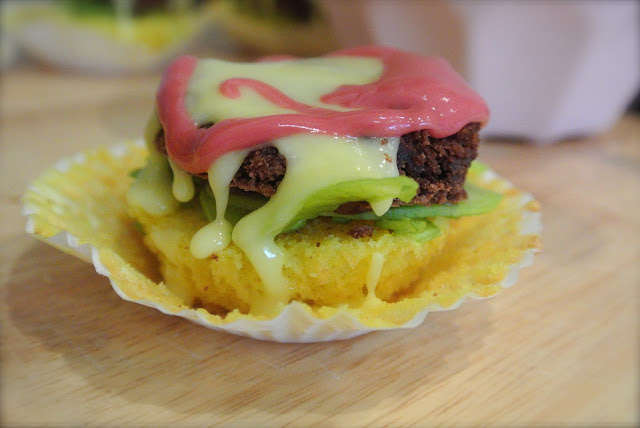 8.) Put the
top on the burger and secure with a cocktail stick. Finally, if you want you
can imitate the sesame seeds using sprinkles. Use leftover icing to ‘glue’ the
sprinkles to the burger bun. 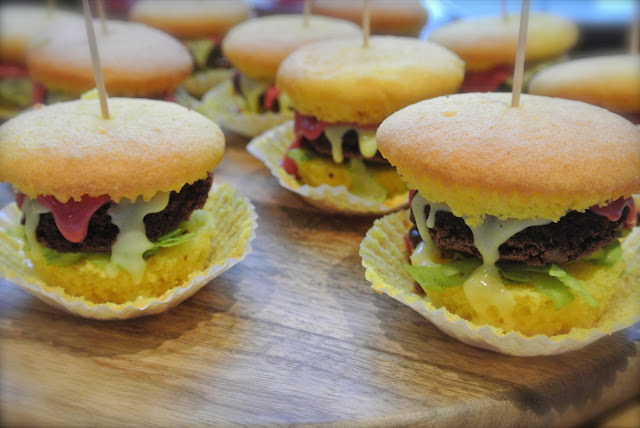 And your burgers are
complete!! If you want, you can easily make Milkshake Cupcakes to complete the
take-away theme. You will need some chocolate for melting, as well as some butter and cream to mix it with. Also, some red food colouring, icing sugar and I cheated and bought some ready made squeezy icing for the ‘cream’. 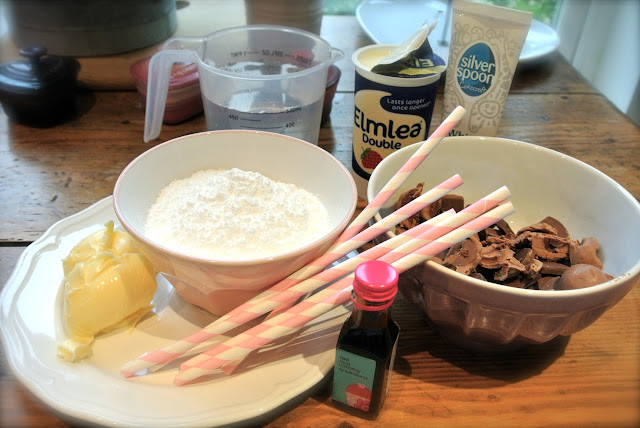 I managed to find some
chocolates hidden away in the cupboard (I have no idea how they escaped my
cravings), any reasonably rich chocolate will do. Break up the chocolate
pieces. 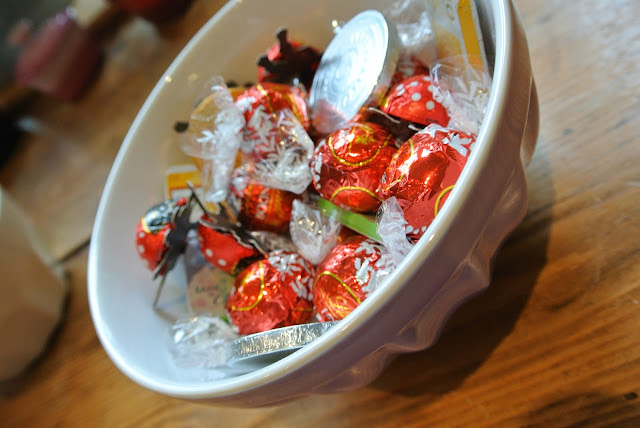 Make up some pink
icing and decorate each cake, leave it to set or pop the cakes in the fridge
for 20 mins or so while you make the chocolate. 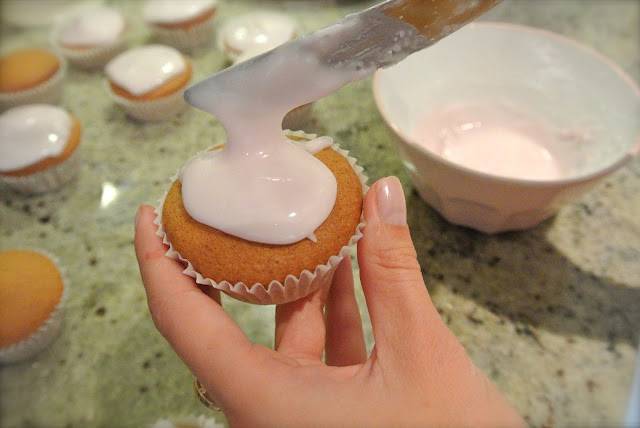 To make the chocolate
paste, melt a small amount (1tbsp) or butter and an equally small amount of
water and cream in a saucepan. Keep stirring the mixture until it starts to
simmer, and then add the chocolate and a dash of salt. Keep stirring the
mixture, then take it off the heat. If it is a bit runny, pop it in the fridge
for a while. Use a spoon to apply to the cupcakes once the pink icing is
completely set. 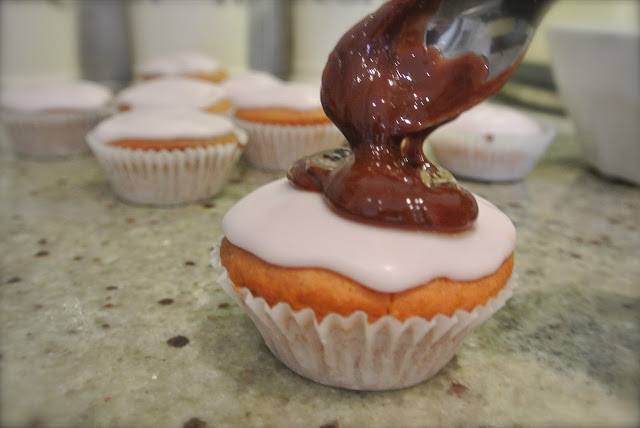 After allowing the
chocolate to set a little, use the squeezy icing to make cream swirls on the
top of each cupcake. If you have some cute straws (available on eBay), cut them
to 2inches and push into the cupcakes. You can finish with sprinkles or glitter
spray if you like! 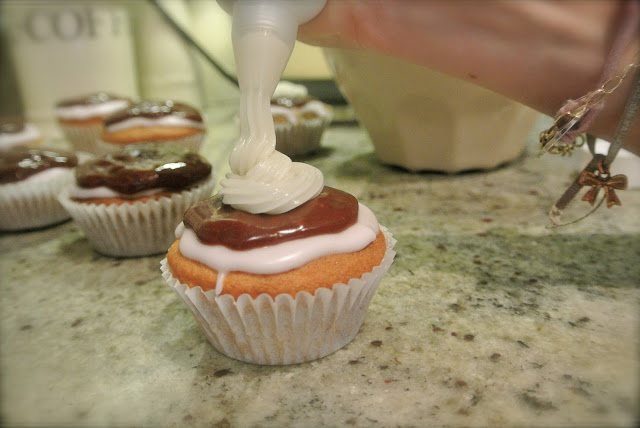 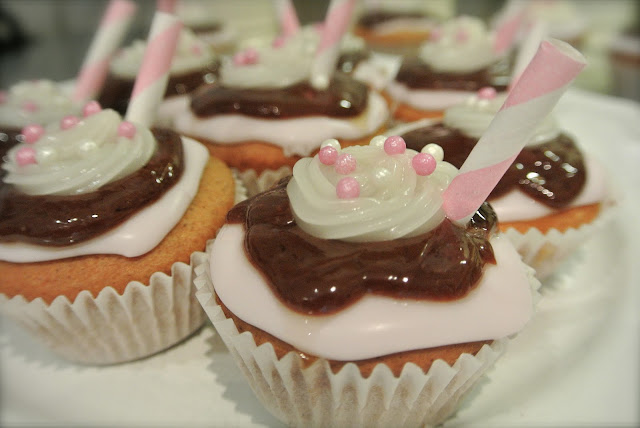 Now, take lots of pictures of your masterpieces and show them off on instagram before getting stuck in! Enjoy!