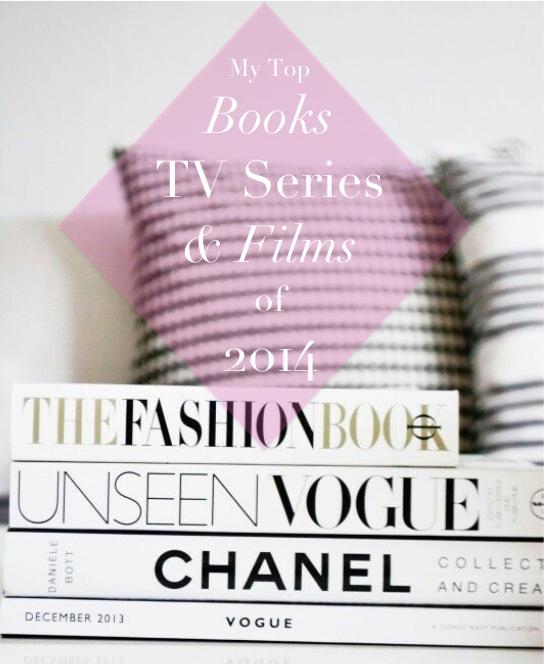 As we draw to the end of the year, it is time to do my favourites! I already posted about my favourite beauty products of the year here, but in this post I thought I’d share my favourite books, TV shows and films from 2014. This year was also the year that I discovered Netflix, and so I’m not ashamed to say that a lot of my favourites include re-runs of old TV series!

The Fall – A classic British Crime drama, one which I still don’t know the ending but as soon as I finish writing this post, i’ll be watching the finale! It’s set in Northern Ireland and tells the story of detective Stella Gibson (the somehow incredibly sexy Gillian Anderson) as she hunts down the seriously disturbed (but also incredible sexy… is that wrong?!) serial killer, Paul Spector. Paul is played by the super handsome Jamie Dornan who is soon to be on our screens as Christian Gray. It’s a creepy, gripping drama, and one which you should definitely check out if you love anything to do with crime!
The Missing – Another Crime Drama from the BBC, which follows the story of a family of a boy who disappeared from a hotel bar in France during a family holiday. With echoes of the Madeleine McCann disappearance as the finger is pointed at the parents, the final episode has a chilling twist which I don’t wait to ruin for anyone that hasn’t seen it! If you didn’t catch it when it was on, then definitely seek it out on iPlayer, you’ll be hooked!
Gossip Girl – It’s my guilty pleasure, I love it! Since downloading Netflix I’ve been rediscovering my obsession with the American series which follows the lives of the super fashionable and privileged teens of New York’s Upper East Side. Oh how I longed to be part of Blair Waldorf’s social scene back when I watched it when I was younger…. who am I kidding, I would still love to be!
Modern Family – Back in 2012 when I met my boyfriend in the Maldives (why does it always sound like I’m name dropping when I say this!!), he kept quoting hilarious lines from Modern Family, and practically forced me to watch it as soon as we got back to the UK, well, I’m so glad he did! From what I’ve found, you either love or hate Modern Family, but I can safely say that it’s one of the funniest series that I’ve ever watched!
My Top Films

Gone Girl– I hadn’t read the book, so went into the cinema completely unaware of the huge twist in the film, which is about the disappearance of a girl named Amy. The film unearths the secrets of a modern marriage and is filled with lies and deceit, but while still being a stylish and intelligent film. I won’t give it away just in case you’ve had your head in the clouds this year – but throughout the whole film you’ll be wondering whether in fact Nick Dunne did kill his wife?

Love, Rosie – A light hearted, cheery, cheesy romcom which follows Rosie and Alex growing up together, yet continually missing opportunities to be together. Despite all the obstacles, they predictably always find their way back to each other. Yes, you know how it’s going to end, but it’s a wonderful will-they-won’t-they film which will have you giggling and thanking god that it didn’t happen to you, throughout!

The Other Woman – Can you tell that I love a good chick flick?! With a fab cast including Cameron Diaz, Leslie Mann and Kate Upton, this girly comedy is packed with cliche’s and predictable turns, but it provides lots of giggles and eye candy – what more does a girl want!

Ghost – An oldie, but thanks to Netflix I only watched it for the first time this year. It had me crying throughout, yet also oddly satisfied by the ending. Ghost is a 1990’s film which follows Sam (Patrick Swayze) after his murder, as he helps his wife (Demi Moore) to learn what caused his death. The film cleverly blends comedy, romance, action and horror and has left me dying to see the Musical which is still doing the rounds in London’s West End.

Paco Underhill, Why We Buy – I have to admit that I haven’t read much fiction this year, and this was actually part of my dissertation studies! The book looks into the psychology of shopping, why we behave in certain ways when we enter a store, and why stores are built the way they are in order to make us spend more. If you’re interested in fashion, or just love to shop, this book is a fantastic eye opener! For example, did you know that most shopping malls have no windows and no clocks, so that we loose track of time and spend longer shopping? So many interesting snippets in this book! Available on Amazon here.

Sophie Kinsella, Shopaholic to the Stars – When I do read fiction, it’s usually when I’m sunning myself either in the garden or while on holiday, so it’s got to be an easy read! My favourite Chick Lit author, Sophie Kinsella treated us to a new Shopaholic book this year and it was worth the wait! The book follows Becky and her silly frivolous antics as she sets about her new career path as Stylist to the Stars, but as you can imagine, it isn’t as easy as she first imagines! Available on Amazon here.

Tim Walker, Pictures – Now this isn’t a book that you will sit down and read, cover to cover, but more what I’d class as a ‘Coffee Table Book’. It’s a chunky book which features the work of top fashion photographer, Tim Walker. The images inspired me during my early years at university at The London College of Fashion, and the playful images are some of the most imaginative, glamorous fashion photography being produced today. Chances are, some of your favourite advertising campaigns that you’ve seen in Vogue were shot by Tim Walker; my favourites included the Mulberry SS12 and SS13 campaigns which he shot while I worked for the brand, so they will always remind me of my time there! Available from Amazon here.

I wrote this post after I was contacted by Joe Blogs Network, as part of their #CurrysFiresideFiction Campaign. You can find out more about the campaign here!

What have been your favourites this year?