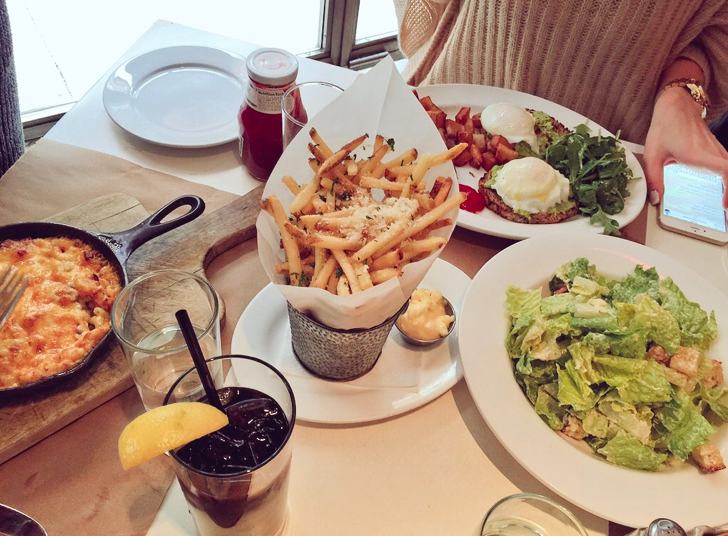 During my last few trips to New York I discovered some incredible places to sample the best of American cuisine. Yes, I know America isn’t exactly known for it’s Gourmet credentials, so my top 3 places below are based on the atmosphere of the restaurant as well as the food. So in no particular order, my three favourite places to eat in NYC are… 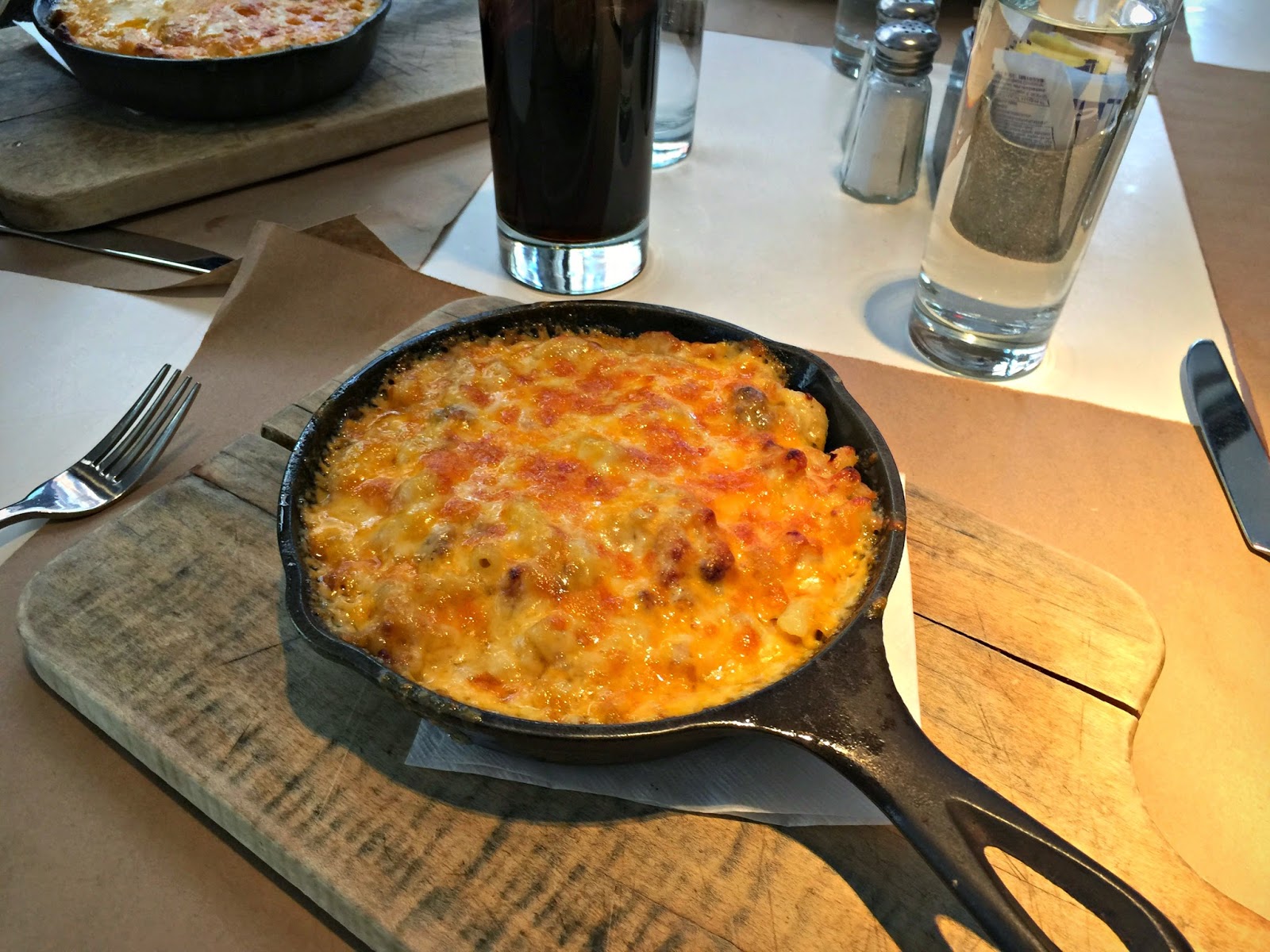 Macbar – 54 Prince Street
The clue is in the name, and for a Mac n Cheese lover like myself, it’s heaven. The menu reads like a list of Mac n Cheese’s that you could only ever dream of; including Mac Quack (with shredded duck), Margarita Mac, with fresh tomatoes, mozzarella, parmigiano and fresh basil, as well as Cheese Burger Mac which was my personal choice, complete with Ground Angus beef and lots and lots of cheese. 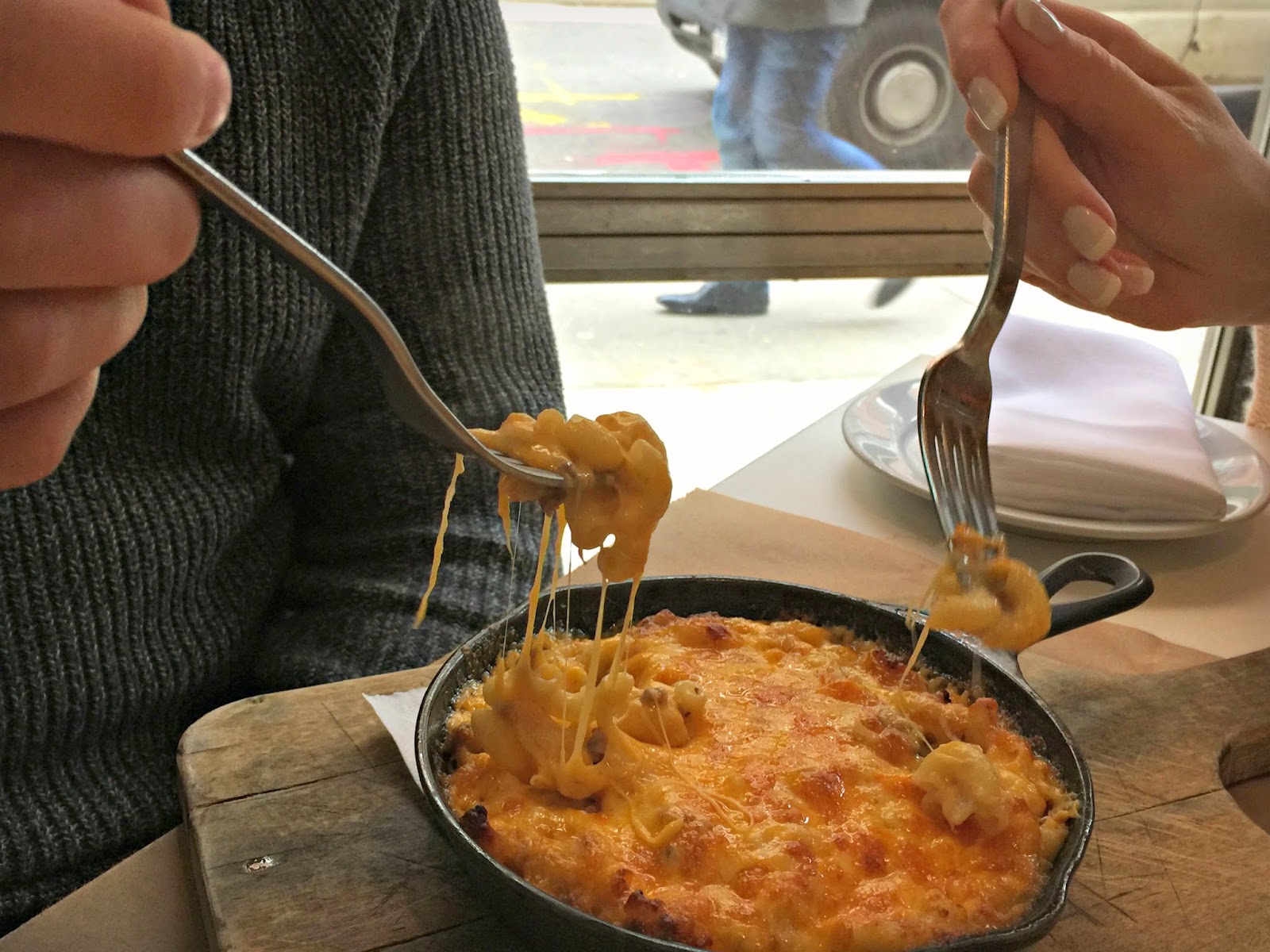 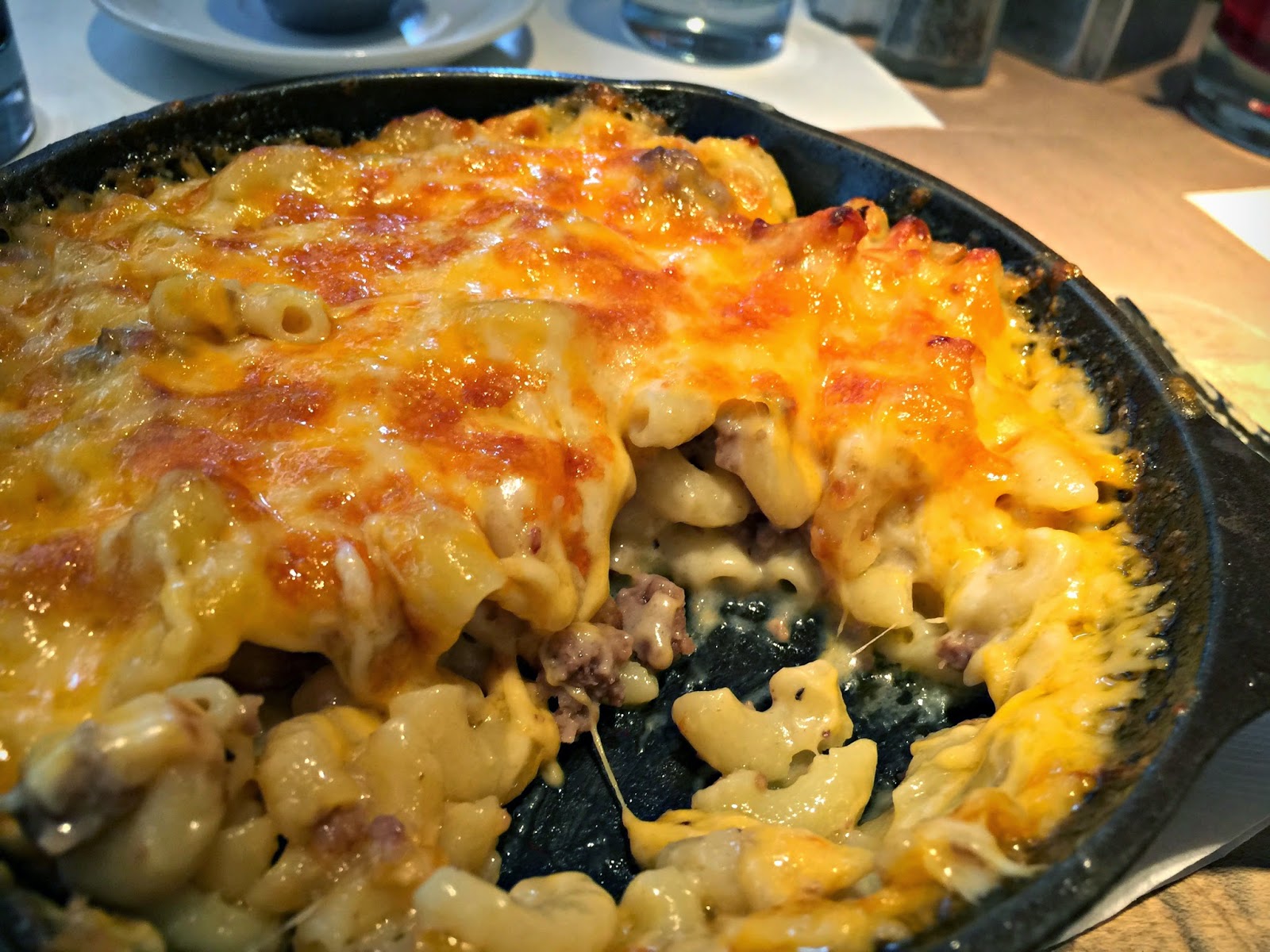 Look at all that gooey cheese…. Mac Bar prides itself on all the different artisan cheeses used to create that scrumptious warming taste, and even the interior is an ode to Mac n Cheese, yellow leather chairs included! 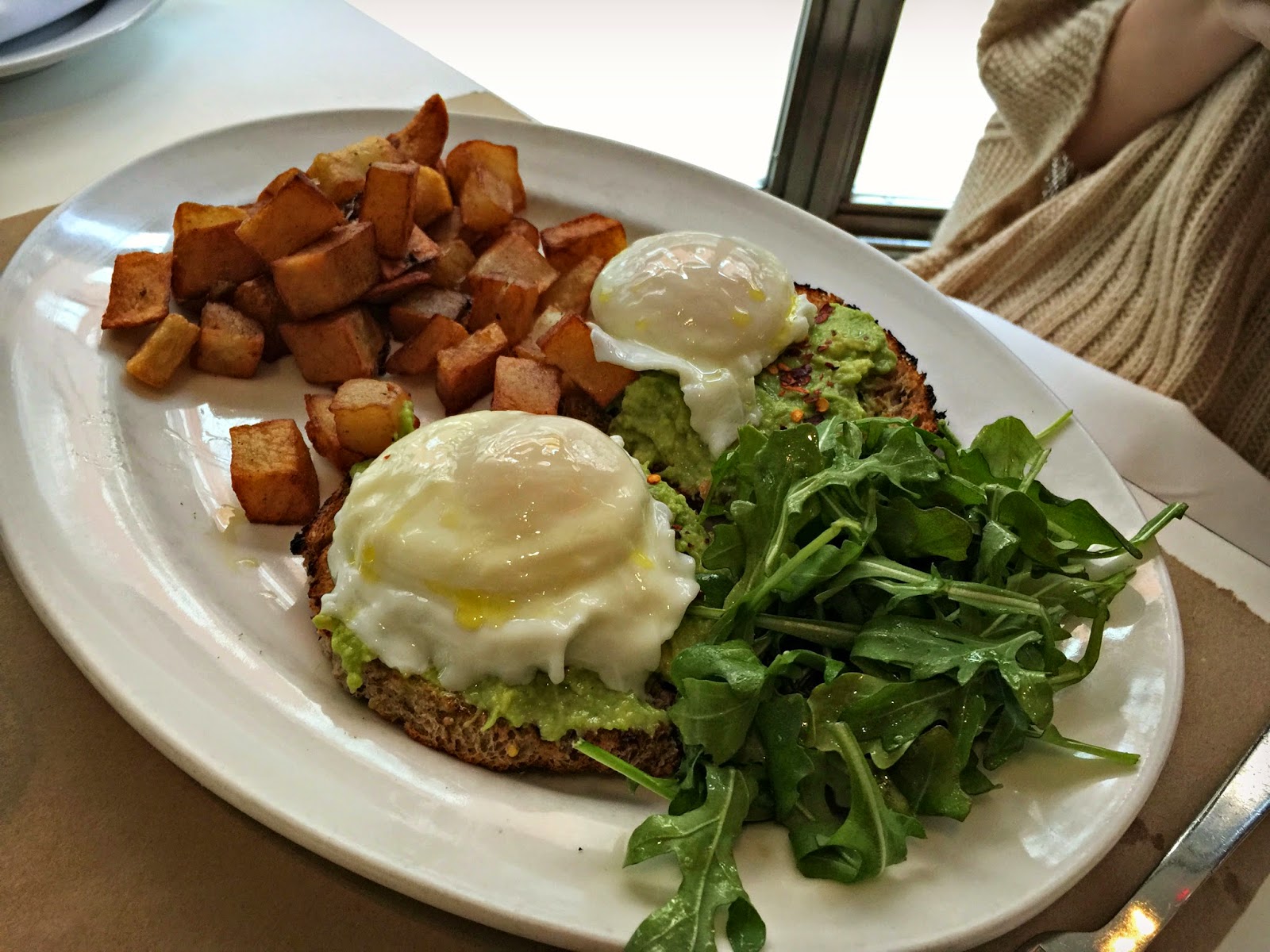 If you’re health conscious or simply don’t like Mac n Cheese, there are some slightly healthier options including salads, eggs benedict and other light brunch options.

Beauty & Essex – 146 Essex Street
You might walk past the unassuming front-of-house pawnshop without looking twice, but the frontage which harks back to the Lower East Side of last century hides a fabulous decadent restaurant. Walking past the antique store, a giant door is guarded by an equally giant bouncer, but fear not; there’s none of that London pretentiousness, just approach and he will open the door for you with a smile.

The bar is mirrored and light reflects from the giant chandelliers, and you are seated in a middle room with blush round seating booths beneath a grand latticed skylight. Thumping music creates ambience without making you feel like you’re dining in a club, and it certainly doesn’t put off seasoned diners.

Everything on the menu looks incredible, so we try to order as many small dishes as possible including Oysters (so good we had to order more) Bone Marrow (not as good as the one served at The Hawksmoor, but very tasty) and tuna Tar Tar.

It was the mains however that really left a lasting impression. I ordered filet steak and although it was a little undercooked for my usual preference, it was the most divine, flavoursome, tender steak I had ever eaten.. and every side complimented it perfectly.
We didn’t leave room for deserts but still had the energy to explore the club upstairs – well, it would be rude not to after we spotted a whole host of Victoria’s Secret models heading there! 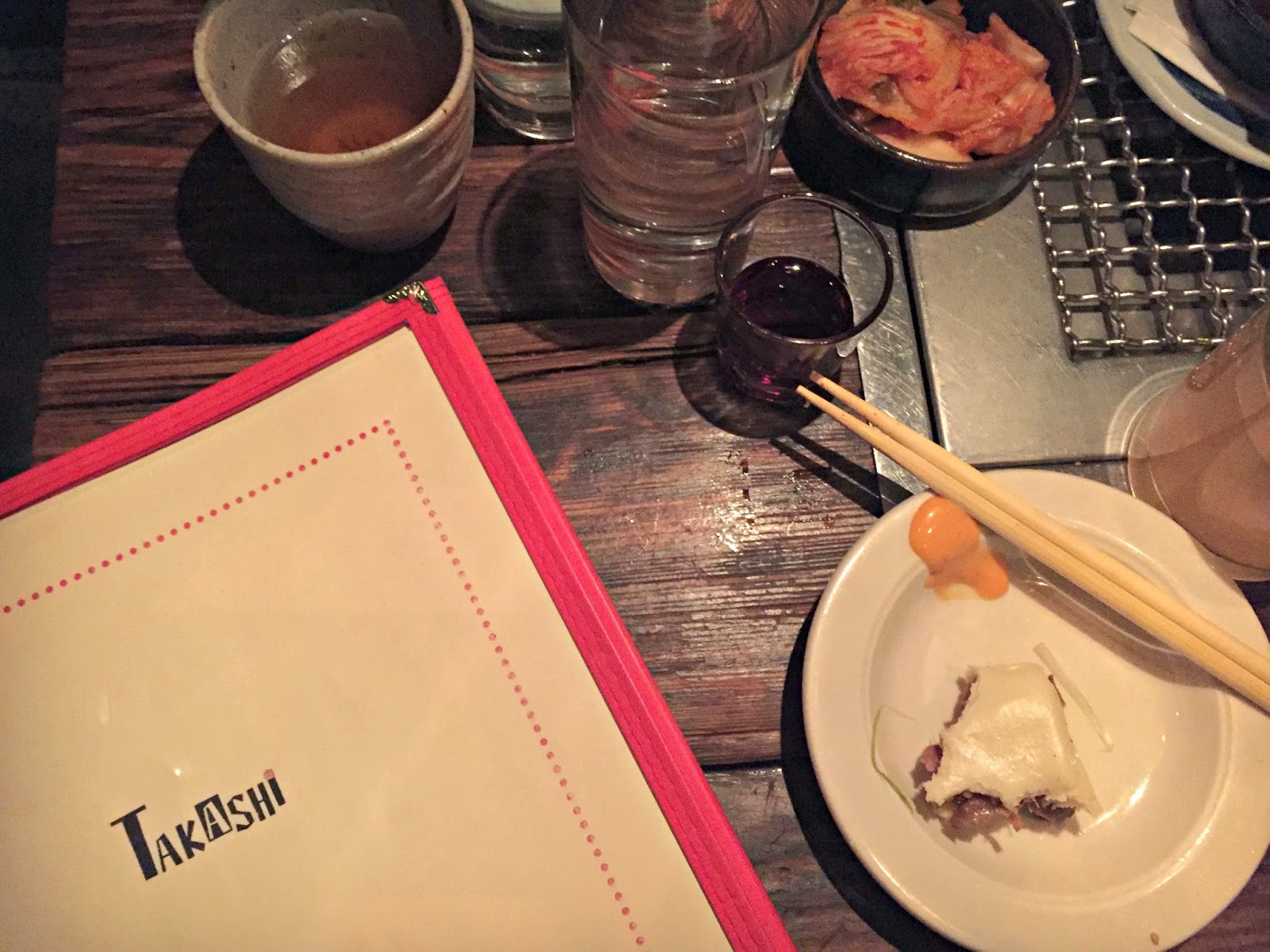 Takashi – 465 Hudson Street
If you like beef and don’t mind cooking it yourself, then you can’t really go wrong at Takashi. Here, the beef is presented in its entirity and you will be presented with raw tongue, liver, belly, intestines and other areas that make me squirm just to think of them! As a slightly squeamish eater, I went for the more familiar ribeye and short rib, but was still tempted to try the more unusual cuts. 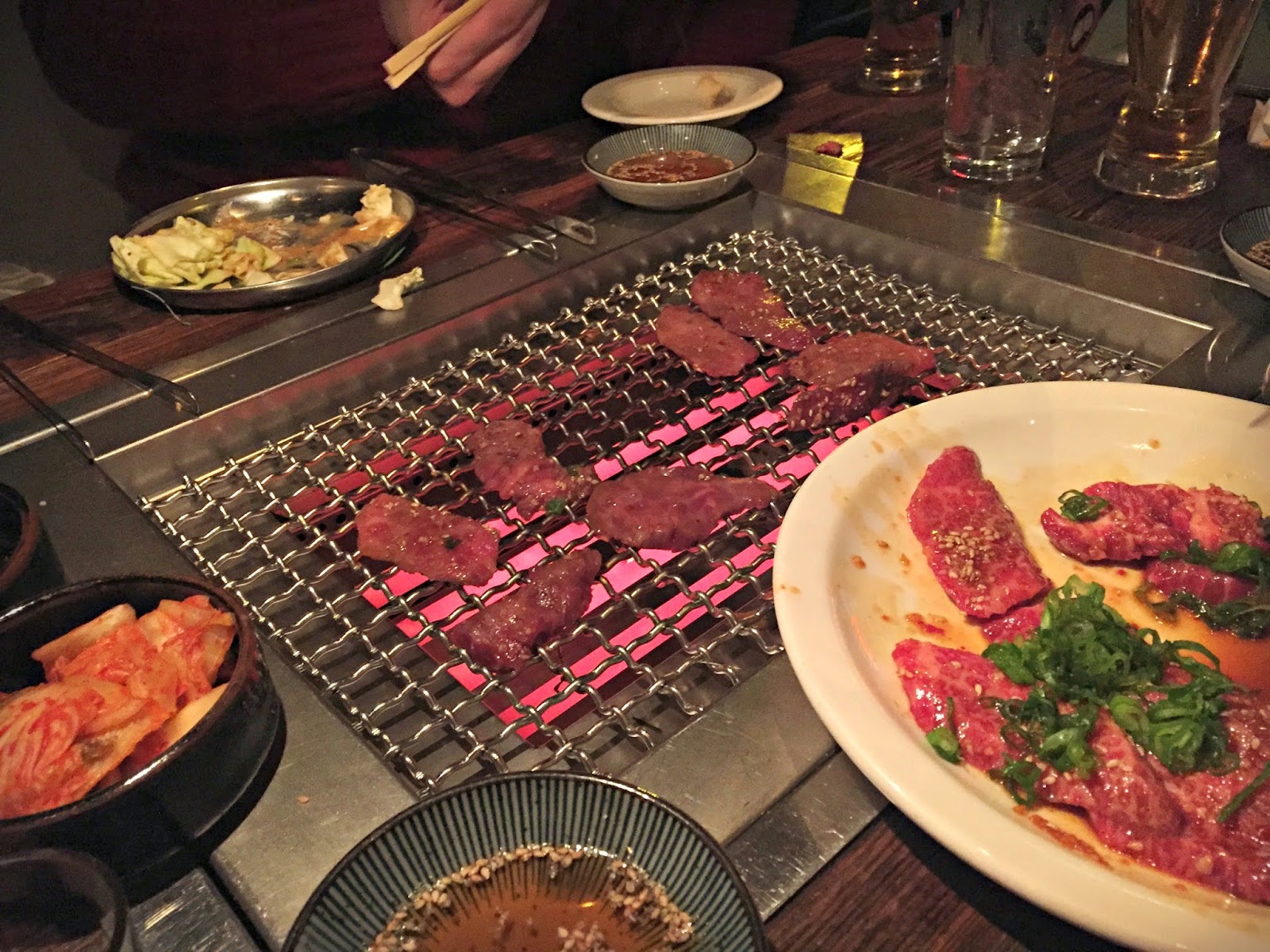 Wear something that you won’t need to wear for the rest of your trip; because the BBQ aromas will not, I repeat NOT come out easily! Using skewers, you cook each meat piece to your liking on the griddle in the centre of the table, and the waiter is at hand to recommend how long you leave each piece in order for it to be cooked to perfection. 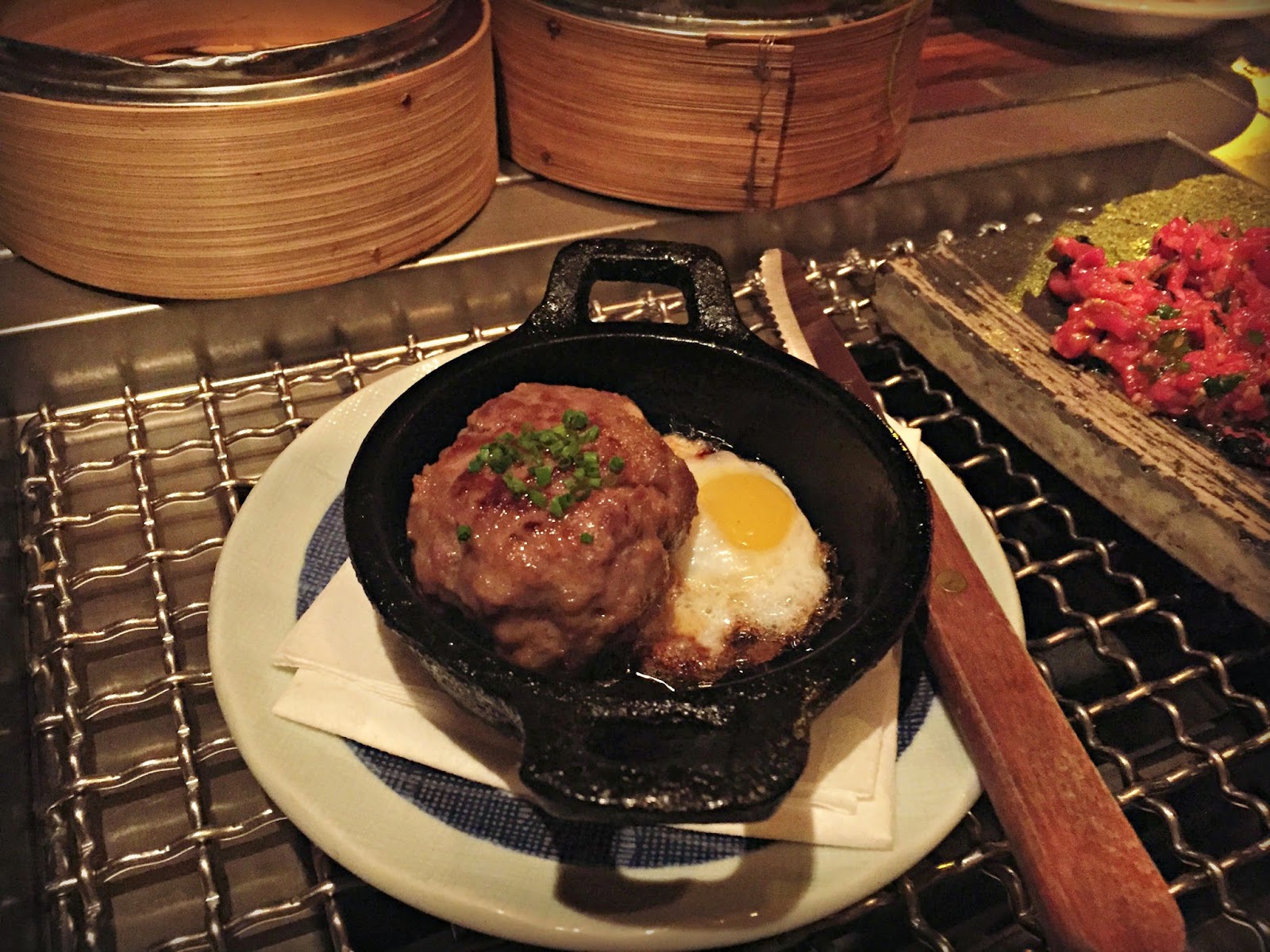 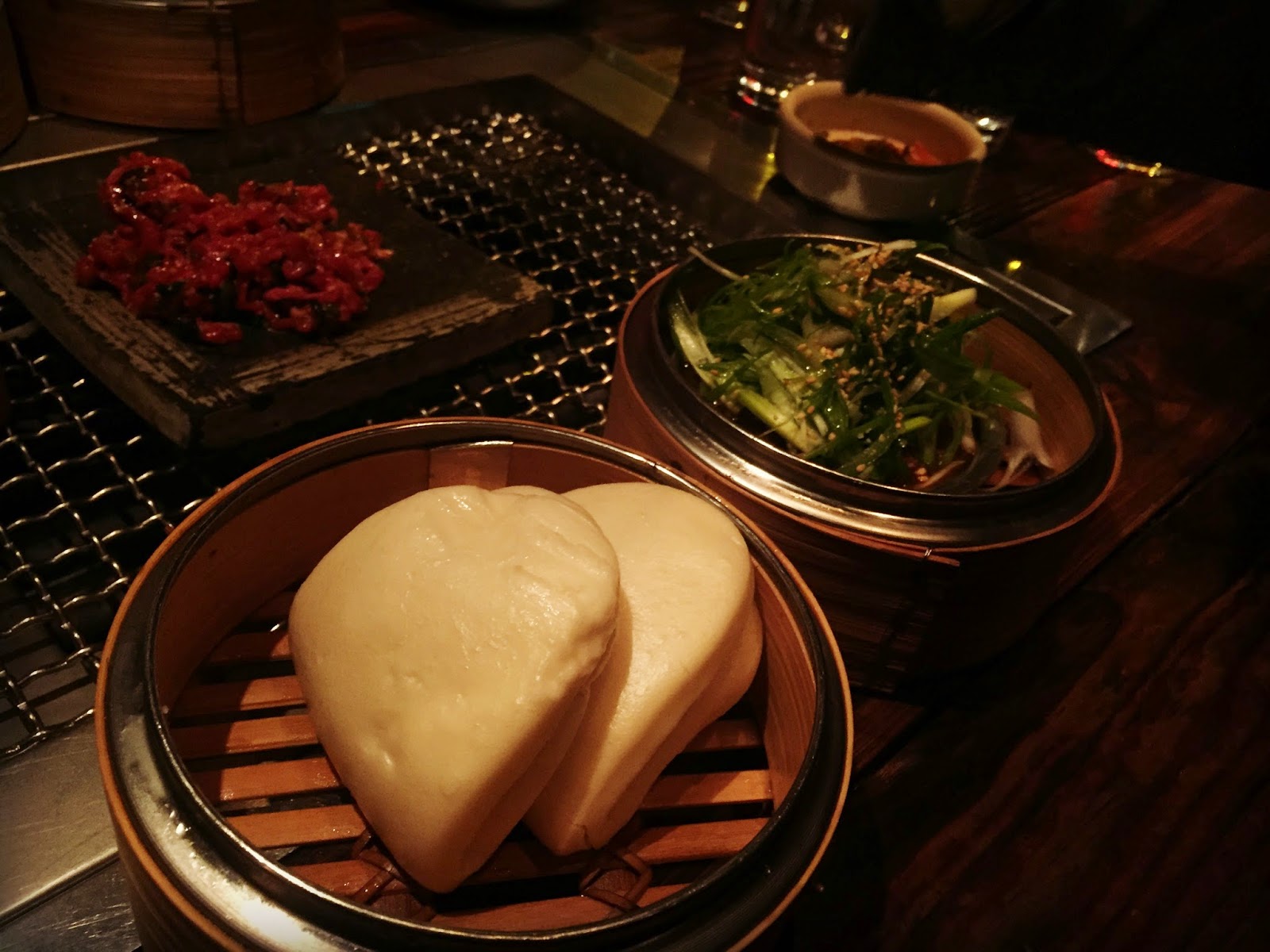 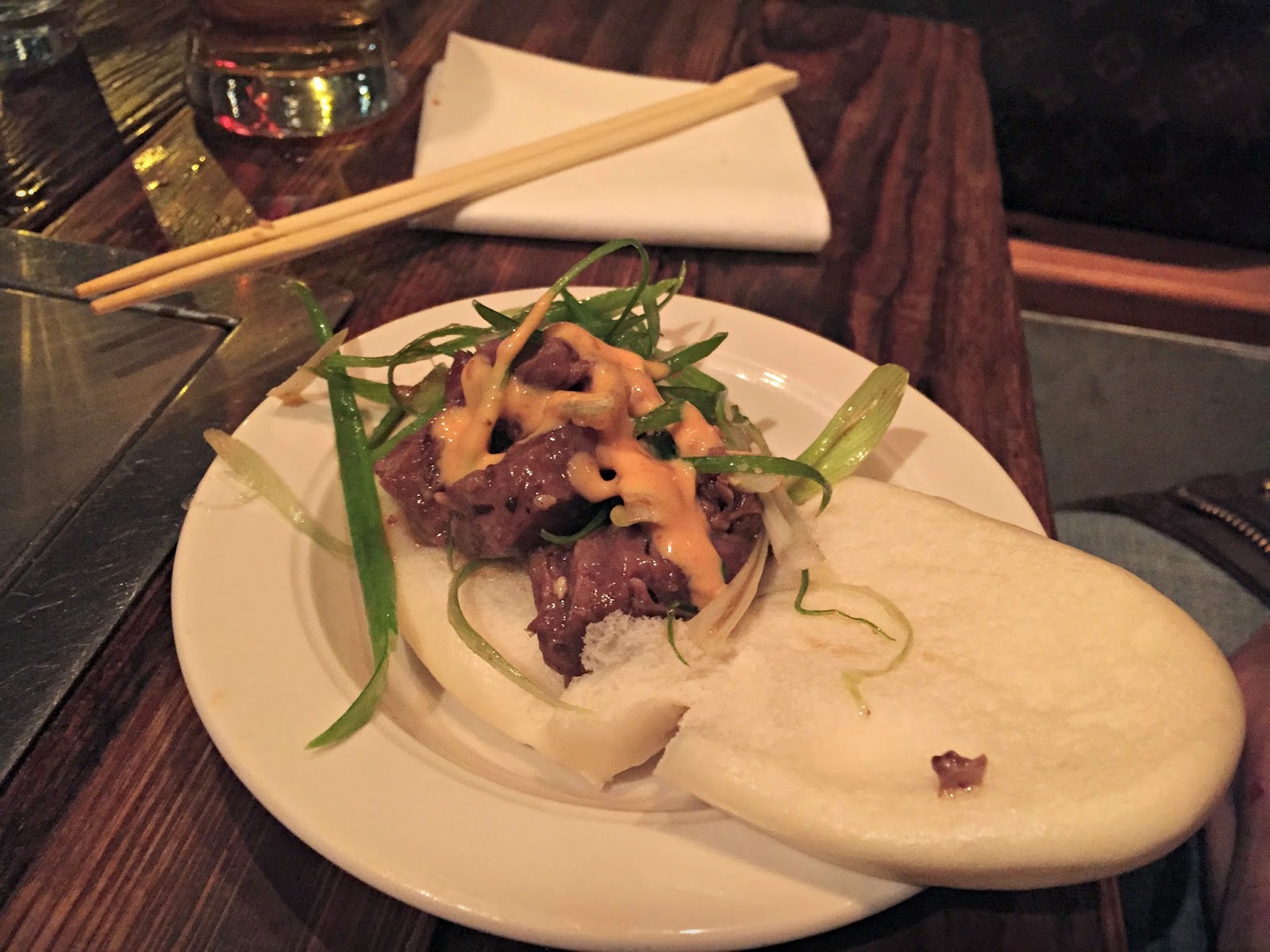 The shredded beef in a fluffy bun was my favourite dish, and while you go to Takashi for the meat, all the sides are fabulous too. The chalkboard menu behind the tables lists the scrumptious sides as well as encouraging you to try the unusual cuts of meat. 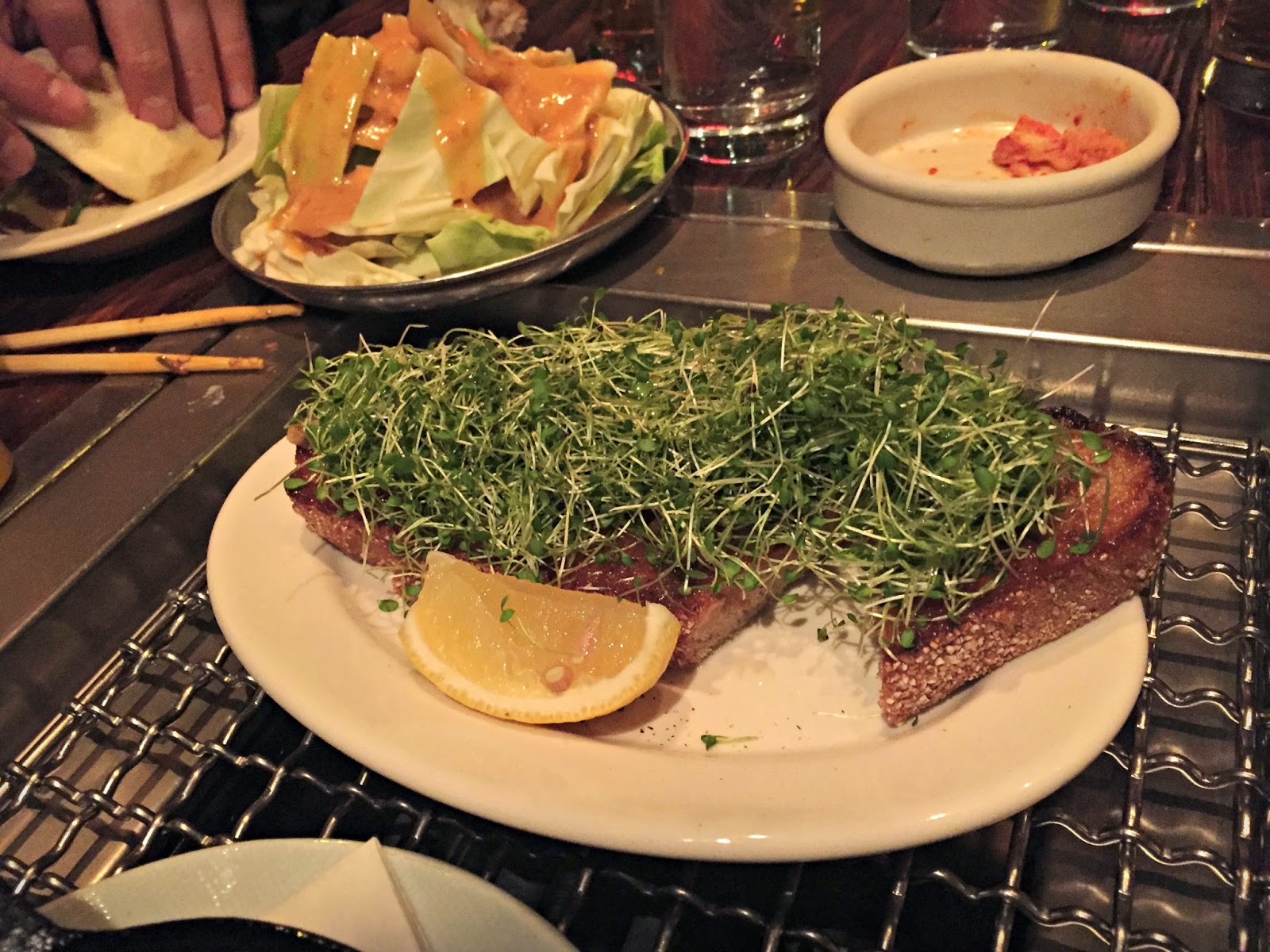 Takashi is the brainchild of a Japanese chef, with family that traces back to Korea and the menu shows traces of both cultures. For any discerning carnivores looking for a most unusual dining experience in NYC, Takashi is definitely a place to visit.

I’d love to know your NYC restaurant recommendations, where should I try next time?

How to Accessorise your Swimsuit

How To Spend 48 Hours in Cambodia

My Favourite Beach Clubs in Ibiza