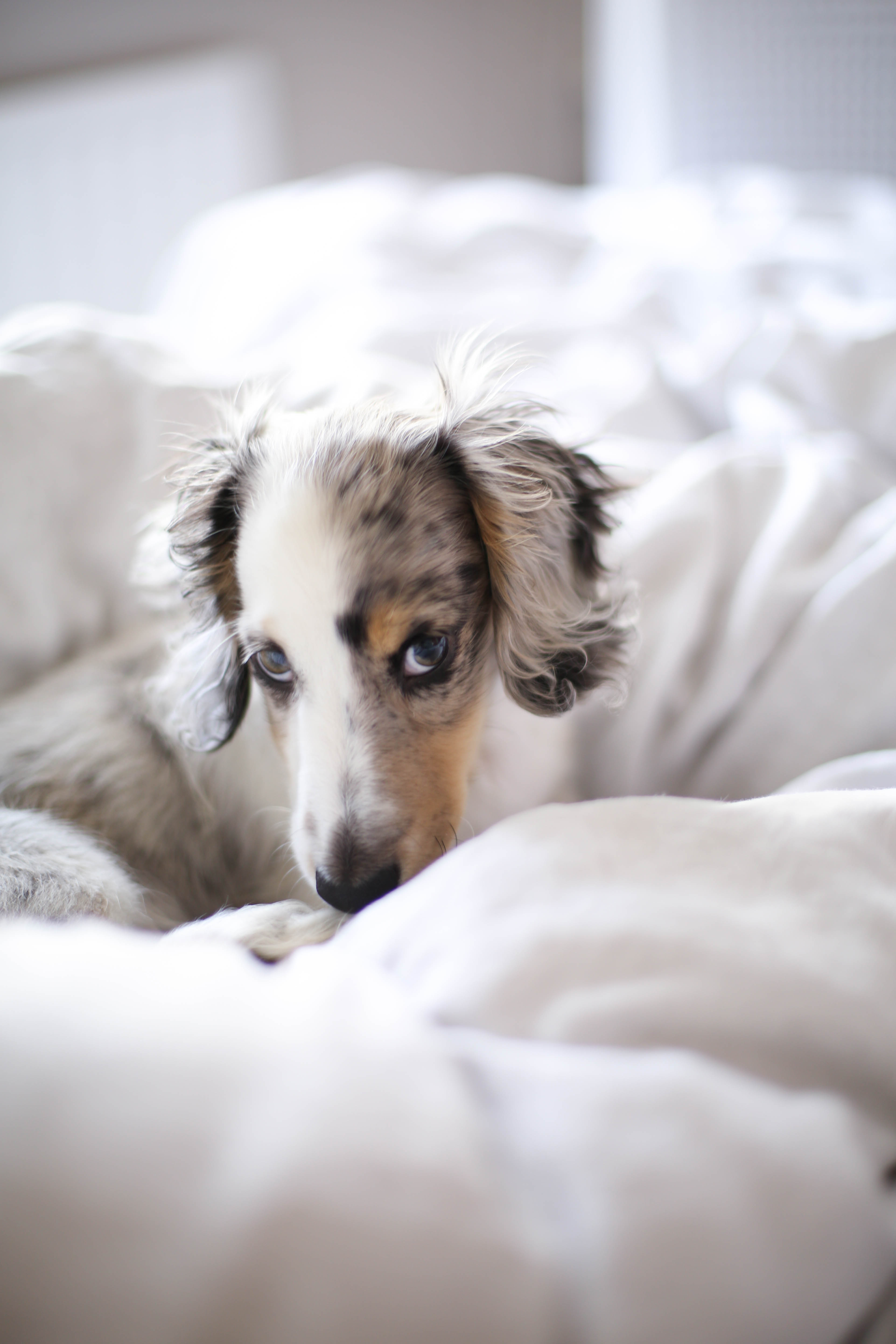 There’s someone very special I’d like you to meet…

… and his name is Dickens! You’ve probably spotted this adorable little chap on my Instagram stories over the past week, as well as the not one, but two YouTube videos where we picked him up and introduced him to our family – and even though it’s only been a week, Dickens already feels like part of the family. His older brother Dexter has been busy showing him the ropes this week; and by that I mean where to lie in order to get the afternoon sun rays, where to sniff when it’s time to hint that it’s dinner time, and how to perfect those Puppy Dog eyes!

We’d been talking about getting a brother for Dexter for quite some time, and now that Dexter is two it seemed like the perfect age. We felt that Dexter would be young enough to still have playful puppy tendencies to keep Dickens tired out, and yet be ‘mature’ enough so that Dickens wouldn’t pick up any bad habits.

So as it’s our second time round experiencing the joys of a new puppy, I thought I’d share a few tips in today’s post!

What To Pack in your Puppy Bag

When picking up Dickens from Leeds (yep, a 9 hour round trip from London but he was worth it!) we prepared a bag of essentials, and the bag itself was a grey portable dog bed / bag which I picked up from Amazon. It meant he had a safe and comfortable base when we travelled home. As well as the necessities such as poo bags, some tissues and some baby wipes (just in case of any accidents!) we also packed a rope toy in case he was teething, and also a microfibre blanket. We let Dicken’s mummy play on the blanket and I cuddled her in it while we spoke to the breeders; this way Dickens would be comforted by her smell on the way home and for the first few days in his new house. We also took a collapsible dog bowl and some small treats too.

My number one piece of advice would be to arrange your insurance as soon as possible! We had a drama with Dexter when he hurt himself the day after we’d bought him home, no insurance meant for a hefty Vet bill as he had to have an X ray! We learnt our lesson, and now both the boys are fully insured.

Also within your first week with your new puppy, you need to plan extra time into your schedule. Ideally pick up a puppy before a long weekend (bank holidays are great!) so you have as much time together as possible. Even take some time off work – trust me, you’ll want to spend every second with your new pal! Oh, and you’ll want to start puppy training too!

Ideally you should bring home some of the food that the breeder or shelter was giving your puppy, and then phase it in with the new food that you choose to feed them – this should minimise any digestive upsets. Always put the food in the same place to help establish a routine, and if they’re not eating, try pouring a little hot water onto the food to make it softer and easier to eat. Treats are important too, and we like to give Dexter a Pedigree Dentastix every day; not only because he loves to gnaw on it (and it keeps him quiet for a little while!) but more importantly it’s great for their Dental health too.

Which brings me nicely to my next point! Dog Dental Care is so important in dogs and thankfully there are some simple ways of maintaining healthy teeth and gums that your pet will enjoy too. The main thing is Dentastix. We give Dexter one every day, and are now introducing the small ones to Dickens, although I am currently just cutting them in half and giving him an even smaller portion as he is just so mini! The X shape of the Dentastix not only makes it great fun to chew, but also has a special texture which helps to remove tartar from your dogs teeth. As well as this, ensure your puppy is drinking enough water, and you can even ‘try’ brushing their teeth with a special puppy toothpaste – ours is meat flavoured which both the boys seem to love!

Of course this sounds obvious, but be gentle and fair with your new puppy, and don’t scold them for something they did a while ago as they won’t have a clue what the problem is, and they’ll think you’re angry for no reason. Instead just encourage the behaviour you do want by giving extra cuddles and attention!

As soon as you get the all clear from your vet, take your new puppy out and gradually introduce him to new puppies (and humans!) in a safe environment. Teach him to be a sociable citizen and over time he will gain in confidence and social skills! When it comes to making introductions to existing pets you should try to let them get to know each other on neutral ground; neither will feel the need to defend their territory! We were sure to give Dexter extra loving and attention so he never felt any jealousy with Dickens – and thankfully now they are best of friends!

This post is a collaboration with Pedigree, but all thoughts are my own. For additional dental care information you can read the following  Pedigree Reviews  article for tips and advice.

What are your tips for getting a new puppy? What do you think of my handsome new chap?!?!